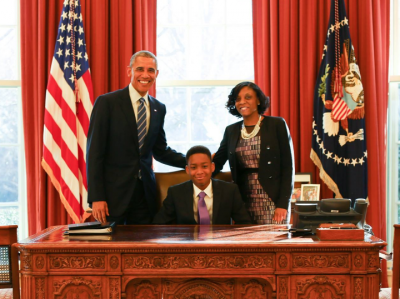 “Who’s influenced you the most in your life?”

“How has she influenced you?”

“When we get in trouble, she doesn’t suspend us. She calls us to her office and tells us that each time somebody fails out of school, a new jail cell gets built. And one time she made every student stand up, one at a time, and she told each one of us that we matter.”

This was the conversation between Brandon Stanton, the founder of  Humans of New York, and Vidal, a 13yo student at Mott Hall Bridges Academy, a middle school in the Brownsville section of Brooklyn.

Brandon published this conversation to Humans of NY’s 11+ million fans. Brandon then interviewed Ms. Lopez, and the story grew. Soon, Vidal and Ms. Lopez appeared on the Ellen Show and visited the Oval Office, and the public raised $1.4 million to support Mott Hall Bridges Academy.

How did this impact Ms. Lopez, who brought this all on by telling her students, one-by-one, that they matter? She told her students:

“I have something to admit. Before this happened, I was about to give up. I was broken. I didn’t think my scholars believed in themselves enough to care. Even though I always tell you that you matter, up until that moment when I read Vidal’s comments, I didn’t feel like I mattered.”

Most of us will never learn this in such a public way, but as we explain in this blog post, when you tell people they matter, they believe you, even if they don’t show it at first, if at all.